We have added photos from the Stephen Hatcher demonstration in January as well as the handouts he provided. Photos are under Galleries/Demonstrators, handouts under the Learning Center. 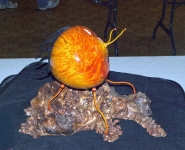 Photos have also been added of show and tell from our 2011 membership meetings. You can find these under Galeries/Show and Tell/2011.

In case you missed it, the February Newsletter has been added here.

For members, the December 2011 and January 2012 board of directors meeting minutes have been added.

There have also been several updates and additions to the chapter calendar.